Microsoft Excel (2007, but perhaps any version) had for a long time been causing me a headache: The act of “Copying” or “cutting” any cell, in any file, would take a couple of seconds. The lag was driving me nuts. Google offered many possible solutions but not worked for me. What it came down to was ‘HD Agent’, some service relating to “Bluestacks”, slowing me right down. I disabled it from the windows task manager services and now excel is running well again. 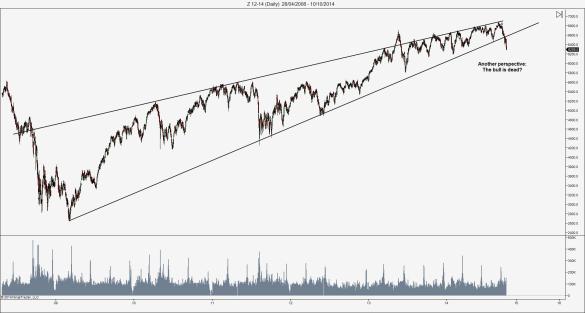 When I look at the TESCO chart I can’t help but be reminded of Gold:

a) A long period of relentless price gains
b) Several years during which a rough “descending triangle” pattern develops
c) A severe break to the downside, sharp enough to suggest fear in the market

The mainstream media has been giving Tesco a hard time lately and it begs the question – has all the bad news finally been priced in? Tesco shares are heading for an old area of support (160p) and I will be curious to see if there’s a significant bounce.

For the sake of Mike Ashley let’s hope so. 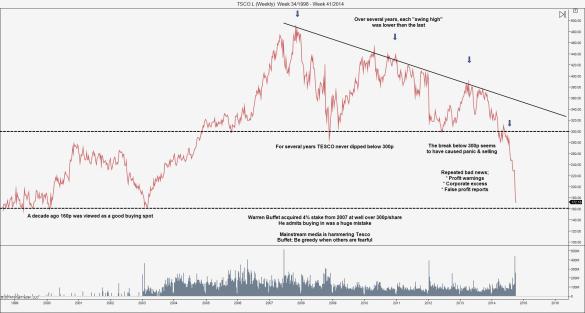 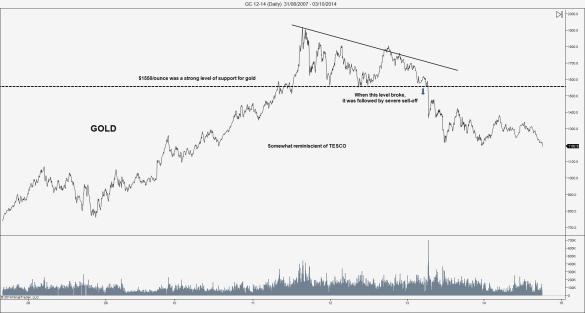 It’s worth keeping an eye on Gold Futures this week. GC is heading closer and closer to the $1200 level, an area where buying support has emerged in the recent past.

Will history repeat or will the downwards trend of the last 2 years crack through towards $1000? 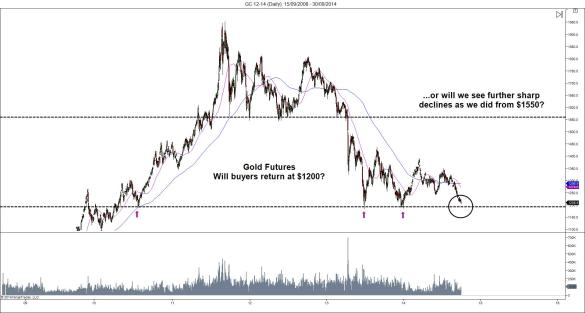 Owing to recent distractions I’ve not updated the blog for the last couple of days. There hasn’t been much to say about the FTSE in any event.

It is worth reiterating that the FTSE currently sits at a very interesting spot, right on the 200 day moving average: 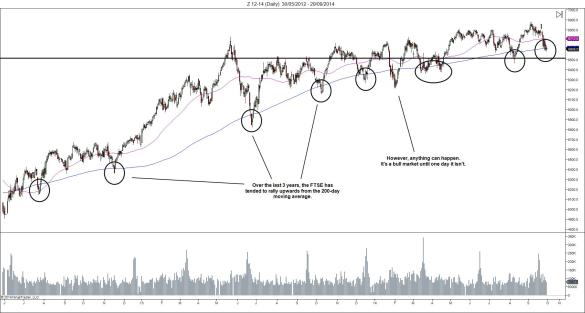 But in terms of intra-day moves, neither Friday nor Monday generated much excitement: 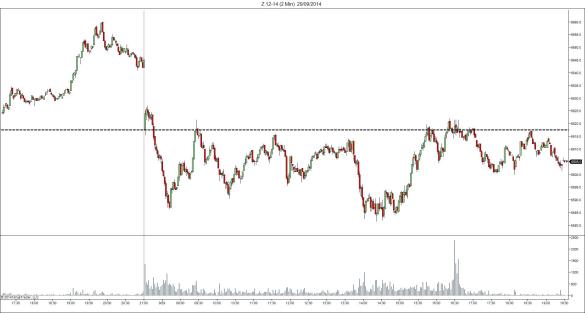 This referendum business continues to pay out… The writing seems to be on the wall that “No” will win the day (as far as the market is concerned, I’m not quite so convinced (see earlier posts)), nevertheless, more reassurances from the latest poll released at 11:45 UK time today pushed the value of the pound a bit higher. The quick fingered could have picked up some free money here. 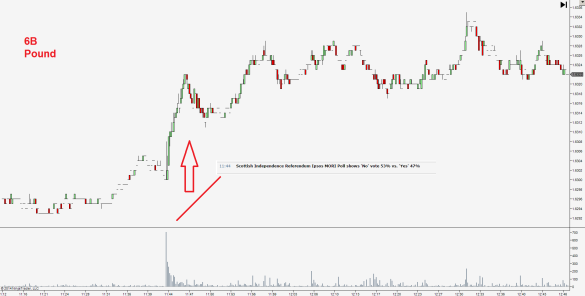 Over the last several years I’ve read thousands upon thousands of trading forum posts, and they have cumulatively left me with at least one lasting impression:

A vast majority of traders believe the key to consistent profit lies in learning to read the ebb and flow of the markets (to develop a “feel for it”), the same way you might go about learning to understand a foreign language.

Jim Dalton’s Market Profile is a great example of this mentality. He recommends breaking the market down in to 30 minute chunks and charting where price ranges during each segment of time. As the hours pass, the chart begins to take shape and, in theory, you make some judgements about where price is heading next from the way the chart (“market profile”) develops.
It’s an organic process which you are supposed to get better at over time – it’s not something somebody teaches you to do in a single day.

While I appreciate Jim Dalton/Peter Steidlmayer isn’t trying to give a mechanical breakdown of when to click buy and sell – the fact is I have observed that the real success comes instead from “gimmicky” trades, as I call them.

What are gimmicky trades exactly? Here are five examples that spring to mind:

1) The bund flipper. I personally have traded this one, although in recent years it has rarely been seen. If you haven’t heard of the flipper before, he operates roughly like this:
He might post a very large bid in the order book, in plain view of the other participants. His real intention is actually not to buy – he is trying to spook others (and/or opposing algorithms) in to buying instead.

In actual fact, often he may simultaneously be offering to sell. He is prodding others to buy from him, and the next thing you know he withdraws the huge bid and posts a huge offer instead! I’ve seen this play out numerous, usually lasting a few minutes each time.

It can be an emotional roller-coaster for the other participants as they get chopped from both sides… so it’s important to be able to recognize it and try to hang on to the flipper’s coat tails when you realize what’s going on.
Incidentally, it shouldn’t be difficult to detect, as the phoney bids will be so big they will stick out like a sore thumb. Of course, the flipper is taking a risk because somebody out there with deep pockets might come along and hit his bid – but that’s the game he plays.

I spent time at a proprietary trading firm where the bund flipper was responsible for launching one or two trading careers (i.e. relative newcomers extracted hundreds of thousands from soley this strategy).
If you’d like to know more about the flipper, read this infamous article.
Disclaimer: The flipper was big several years ago, but hasn’t really shown his hand in any meaningful way in recent years. I’ve also seen him on CL and FDAX…

2) Hitting economic numbers with superior technology. Don’t try this at home, but trust me, if you have an outstandingly quick connection to the exchange (prop trading firm standard), and if the economic data is wildly off expectation, there’s a good chance you can make money if you hit market immediately. Naturally, unless the market is given a genuine shock (e.g. NFP +200k instead of +100k would be quite shocking, +105k wouldn’t be), lightning fast algorithms will have all the profits to themselves, leaving you to hold the bag.

3) Tim Sykes Gap-Up strategy. Infamous penny stock trader Tim Sykes made a small fortune in his early 20’s on the back of… well, let’s face it, taking advantage of the dirty work done by boiler rooms. See his book, American Hedge Fund:
“Brokers frequently called their targets around dinnertime to have the greatest chances of finding somebody at home to take their phone call… Hence, the pileup of pre-market orders and nearly the entire reason for the gap-up plays that had made so much money for me”.
For those who haven’t and won’t read the book, the gist of the strategy was to buy bullish-looking stock towards market close, hold it until the next day by which time the price will have gapped up over night… $$$!

4) Trading Market Close. During the last 15/30 minutes of the cash sessions (so for bund 4:15pm UK time, for S&P500 10pm, for Ftse 100 4:30pm), a tremendous increase in trading volume is all but certain. Much of this increased activity will be due to “Market on close” orders, plenty of it could be profit taking, plenty of it could be what is known as “window dressing” – whereby big hitters in the market try to push the price above a certain level for any number of private reasons. These effects can be especially pronounced during the last trading day of the month, so look out.

This is all quite “cheap and gimmicky” isn’t it?

5) Hitting economic news. Ahh, my favourite, and the underlying focus of this blog. Economic news can come at any time, in any form. I do classify central banker statements as such, although they are pre-scheduled and therefore not quite to my liking. Anyway, in my humble opinion this is the highest probability method of making money: sit at your screen day in day out, and wait for WW3 to breakout. Then sell. If you’re going to be 5 seconds late, hmmmm, maybe you’d best sit on the sidelines! As far as glamour goes, this scores a 0 out of 10. Believe me, I’ve sat in silence staring at real time news for unnatural stretches of time – all the while thinking “what if?…”. That keeps you motivated.

The two key points that these trades have in common is;
* They are not glamorous in any way, and require very little “skill”.
* They can be explained to anybody, being fairly mechanical in nature, which leaves no scope to write books / sell training courses about them!

I hope I’ve convinced a few of you that learning to read the market like it’s a book ain’t necessarily the way forward!

There were a couple of great free money opportunities today.

The first arrived at around 1pm UK time – news came out that online bookie / exchange Betfair had paid out on any “No” Scottish referendum bets… I guess this was mostly a promotional thing, but it provided some upwards impetus to 6B. 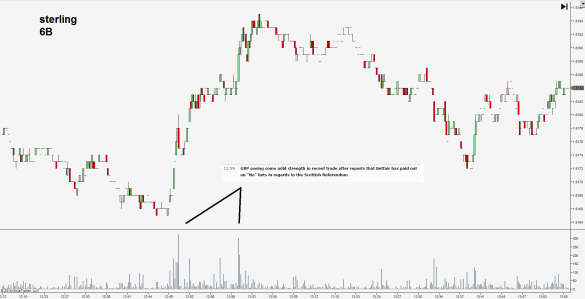 The big one came a few hours later… CNY500 billion additional QE thanks to the Peoples Bank of China. Well, you could have bought almost anything – and you didn’t need to be particularly quick either.

Anyway, Aussie dollar or Gold futures would have been a fine choice… 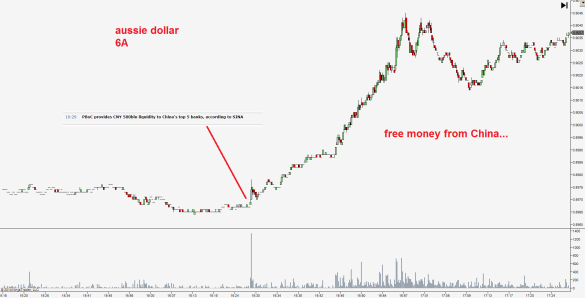 At 1pm today (GMT), Betfair reported they had paid out “six figures” on a number of “No to scottish independence” bets.
Furthermore they pointed out that betting patterns are suggesting a 79pc chance that Scotland will remain in the Union.
While I do believe this is the more likely outcome on September 18, I also believe the betting market has under-estimated the likelihood of a Union breakup.

According to this article, 97% of eligible adults in Scotland have registered to vote in the referendum – a level so high it is without precedent for Scotland.
My guess is that the many hundreds of thousands of “new” voters will tend to be less wealthy and less educated than the typical voting cohort.
Does it make sense for them to maintain the Status Quo – or is it more likely they will take a punt on an Independent Scotland and see how that plays out instead?
I think there’s a reasonable chance of the latter.

Foreign exchange markets have already made it clear that if the Union does break apart, the pound will head lower towards 1.55… 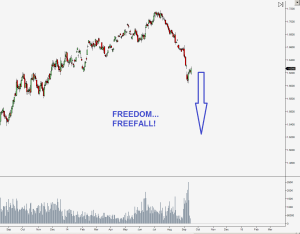 In case you haven’t guessed, I’m praying for a breakup. This is a once-in-a-lifetime opportunity to witness the end of the United Kingdom as we know it, and will make for some surreal newspaper headlines. In fact, if this does come to pass I might just stash a few copies away for future generations to enjoy.

Another interesting and important question is what the UK Office for National Statistics is going to make of all this. Civil servants have been instructed to make no provisions for independence. I guess the politicians feel it would send the wrong signals – or perhaps it is a calculated decision to avoid wasting time and effort on an “unlikely” contingency. I recently heard, in fact, that HM Treasury has made no preparations whatsoever and would be forced to “hire 100 people overnight” if the “Yes” vote won the day.

Anyway, the point I was getting at is this; the ONS produces many important economic data points, such as GDP, employment rates and CPI, all of which help the market second guess what the BoE is going to do next. 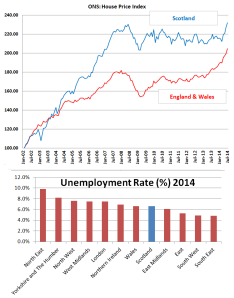 * GDP is going to have to drop from $2.5 trillion to $2.25 trillion.
* It’s difficult to judge what will happen to CPI; as far as I am aware ONS don’t release on regional basis. However, if house prices are any indicator at all, it seems prices may be rising faster in Scotland than in England & Wales.
* Employment, similarly, is surprisingly (to me) low in Scotland.

So if anything perhaps the removal of Scotland could generate an impression of lower rates of inflation in England – perhaps giving BoE’s Carney plenty of room to maintain rock-bottom interest rates?

If I were actively staring at a Bloomberg news screen with my finger on the trigger, I’d be most excited about 6B. The Scottish Referendum has already provided two or three “free money” trades… but as always you must be quick, both in and out. 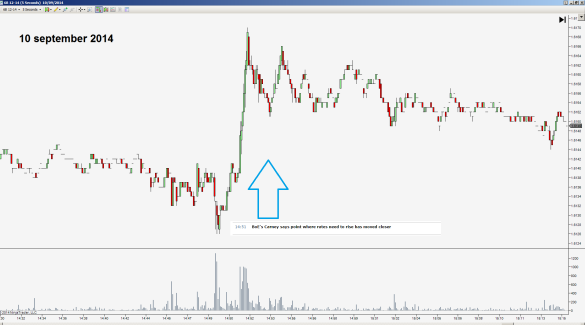